What is the TPPA (Trans-Pacific Partnership Agreement)?

Usually, free trade agreements focus on cutting import tariffs, but the TPPA goes much further than that. It’s more like an investors’ agreement. It rewrites the rules to give more power to multinational corporations, and take power away from people and their democratically elected governments and their citizens. 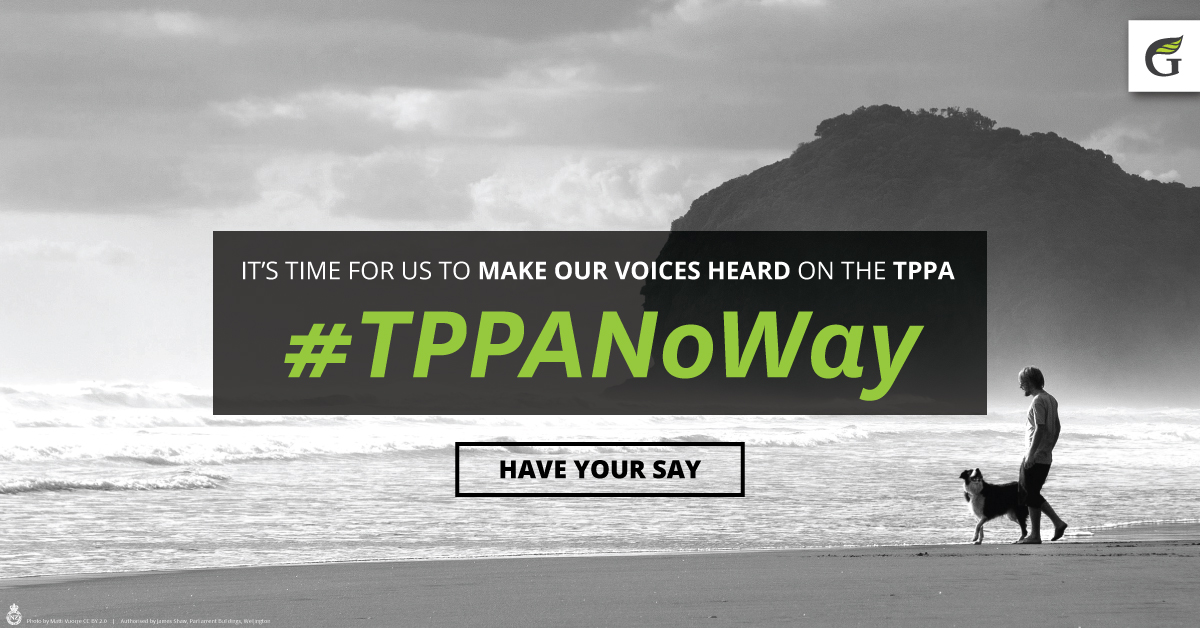 How will the TPPA affect New Zealanders?

Most people won’t see any noticeable economic benefit from the TPPA. The small benefits that the deal might create will go to private companies, while the costs will be borne by ordinary people.

We haven’t seen any evidence that it will create new jobs overall – in fact, the only detailed analysis on this suggests that it will lead to 5000 job losses by 2025.

How does the TPPA benefit multinational corporations?

While New Zealand hasn’t been sued under ISDS before, other countries that have been sued include:

The TPPA requires Pharmac to set up new systems for pharmaceutical companies to challenge Pharmac’s decisions about which medicines to buy for New Zealanders. The initial cost to Pharmac is $4.5 million, plus at least another $1 million every year from patent extensions and at least $2.2 million a year in other ongoing costs. That’s millions of dollars that could be spent on medicines themselves.

The Government has said that most prescriptions will remain $5. But the medicines themselves may become more expensive, meaning bigger subsidies are required and less money to spend on other parts of the health system.

What’s the copyright issue and what does it cost?

The TPPA extends the default period for something to be copyrighted from 50 years to 70 years. This will impose costs on libraries and universities, of around $55 million every year. That’s because old works will remain under copyright, and therefore subject to licence fees, for longer.

However, some local artists and rights holders may benefit from this. In other cases, the rights holder is actually a big record company, not the musician themselves, for example.

The TPPA also makes breaking “digital locks” a criminal office. Digital locks are things like DVD “zones” that control which countries a DVD can be watched in, and potentially also virtual private networks (VPNs) that some people use on the internet to disguise what country they’re located in.

What will the TPPA do for our exporters?

The TPPA will see some tariffs reduced for our exporters in markets like Japan and the USA – but this will happen slowly over many years.

The Government’s own analysis says the economic benefits from the TPPA will be worth just 0.9 percent of GDP in 2030. Regular changes in the global dairy price are more significant than that.

Why does the Green Party oppose the TPPA?

We want New Zealand to develop fair and transparent trade deals that are good for people, good for the planet, and good for our export businesses. We don’t think the TPPA meets these tests.

The TPPA is a bad deal because private companies will get the (small) benefits while ordinary people will shoulder the costs. It’s not about trade, it’s about power. It’s about locking in new rules that limit democratic governments from making free choices.

Would the Green Party withdraw from the TPPA?

In government our plan will be to withdraw New Zealand from the TPPA.  In government, we will have better information about the possibilities and consequences of withdrawing.  If for some reason we cannot withdraw, we would make changes to close loopholes and improve it. But we are fundamentally opposed to the TPPA and our preference is to withdraw New Zealand from it.

What happens next in New Zealand?

A Parliamentary Select Committee is receiving submissions on the TPPA itself until 11 March. After that, the Select Committee will report back to Parliament. Parliament may then decide to vote on the TPPA, or it might not. If the Government still supports the TPPA, then it will introduce legislation to make the changes to our laws that the TPPA requires – this will go through the normal legislative process. After that, the USA can “certify” that it’s satisfied our laws comply with the USA’s interpretation of the TPPA. Then, once enough countries (which must include the USA and Japan) have gone through their own similar processes to ratify the TPPA, it will come into force.

How can you take action?

The TPPA may be signed, but it’s not over yet. There is currently an opportunity to show the National Government how opposed a huge range of New Zealanders are to the TPPA, before the agreement is actually ratified.

Send the Government a message about the TPPA.

Without support from the US Congress and Japan, the TPPA can’t go ahead. That’s because to come into force, the TPPA must be ratified (not just signed) by countries representing at least 85 percent of the total GDP it covers.

But it’s far from clear if the US Congress will ratify the TPPA. There is strong opposition from both Democrats and Republicans. Something will probably have to change for the TPPA to get through Congress – and that could mean further changes to the TPPA to get support from either the tobacco or pharmaceutical industries. Congressmen who support these industries are key roadblocks for TPPA support, and any changes they forced could make it harder to regulate for public health, or make medicines even more expensive.